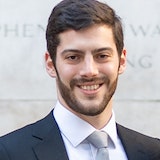 Alex leads the business side of Promise, a start-up that focuses on making the criminal justice system and government payments more cost-effective and humane. Previously, he used AI to detect and prevent financial crimes at Merlon Intelligence. Before that, Alex was one of the overall leads of Palantir's Government business, helping the U.S. contain the spread of diseases, serve our veterans, calculate accurate economic statistics, close opioid pill mills, recover billions of dollars for taxpayers, and set innocent people free, among other projects. Alex received a Bachelor's Degree with honors from Cornell University and a Master's Degree in Computer Science from Georgia Tech.

Alex was named 40 Under 40 by the Armed Forces Communications and Electronics Association (2019); a Truman Scholar (2012); and was the youngest ever recipient of the Sol Stetin Award for Social Justice, given by the American Labor Museum (2010). He is a member of InfraGard, the partnership between the Federal Bureau of Investigation (FBI) and members of the private sector for the protection of U.S. Critical Infrastructure.

Daniel has nearly a decade of experience leading product teams and building cybersecurity products. Currently, he is solving cybersecurity & other digital problems for the federal government. At Exabeam, Daniel managed a product management team and led efforts on various enterprise cybersecurity products. Prior to Exabeam, Daniel led a number of products at Palantir for government clients, building tools focused around cybersecurity, national security, financial crimes, and anti-human-trafficking. Daniel has a degree in Symbolic Systems from Stanford University and graduated Phi Beta Kappa.

Daniel holds certifications as a CISSP and GCFA, and also holds a U.S. patent for a cybersecurity prototype. In his spare time, Daniel consults & volunteers as a cybersecurity resource for political campaigns, non-profits, and individuals.

Amy works on national security as an attorney within the Global Risk + Crisis Management practice at a major law firm. Amy has served as a White House intern on Vice President Biden’s team devoted to ending violence against women, worked on the U.S. foreign affairs budget while on a human rights fellowship in Congresswoman Nita Lowey’s office, was hired as an Obama campaign field organizer in western Colorado, served at the State Department’s U.S. Mission to the EU in Brussels where she focused on international trade, sanctions, and speechwriting, and was awarded a Fulbright to South Korea.

She was previously selected as an Aspen Security Forum Scholar and is a member of the Truman National Security Project. Amy holds a B.A. from Yale, a J.D. from NYU Law, and an M.P.A. from the Harvard Kennedy School of Government. 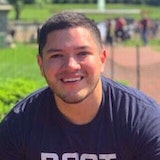 George is a political strategist and former Deputy Political Director and National Delegate Director on Pete Buttigieg’s presidential campaign. Previously, George worked as Senior Policy Advisor at Let America Vote, on the delegates team at Hillary for America, and as a press aide at the U.S. Department of Justice, among other experiences.

George received a B.A. in Government from Cornell University, his M.Ed. in Education Policy and Management from the Harvard Graduate School of Education, and his JD from The George Washington University Law School.